This report is provided by our Marketing Partners Frontier Agriculture.

This week, the world’s wheat futures markets have recovered all the losses they took last Friday. Prices then fell sharply due to Russia and Ukraine signing a deal with Turkey and the United Nations (UN). The deal set out to ship trapped wheat and other grains and oilseeds from Ukraine’s Black Sea ports. However, the market is now reacting to the reality that shipping through these ports will, for some time, be a slow process as there are challenges in securing the resources needed to resume operations whilst the hostilities with Russia continue. Russia launched a missile attack on a vessel in Odessa a day after the deal was signed, which highlighted the fragile nature of the agreement. A week later we are still waiting to see the first vessel to sail.

With challenges for Ukraine shipments and Russian sales due to its export taxes, the world’s major importers have turned to France and other EU origins to source essential supplies of quality wheat. EU wheat exports soared to over 1.4 million tonnes for the first three weeks of the 2022-23 season, and analyst group Agritel said French wheat exports outside of the EU would rise 12.4% on the year to 10.95 million tonnes, despite a 5.6% fall in the harvest. It is reported that France had sold up to seven cargos of wheat to Pakistan following its tender last week. This further highlights the strength of demand for one of the few freely available world wheat origins which should continue to support values in the near term. Analysts see EU wheat production falling to around 123 million tonnes, seven million tonnes down on the year. Meanwhile, the size of the 2022 Russian wheat crop continues to grow. Analyst group SovEcon raised its latest estimate to 90.9 million tonnes.

The domestic wheat harvest powers ahead with some farmers in the south of England already done. Reports still point to a very mixed picture for yield and quality. Yields vary widely depending on soil type, first or second wheat and whether or not rain arrived at the critical time during the growth cycle. The general feedback is pleasing, but variable reports of seven to 12 tonnes per hectare highlight the mixed picture. There are Hagberg’s above 300 and specific weights above 80kgs are commonplace. However, the Achilles heel for the 2022 crop is protein which, like the yield, varies widely. A significant volume of Group Two varieties are below 11% and have been consigned to the feed bin. Very few of the Group One varieties tested meet the millers’ minimum bread making specification of 13% and an extensive fallback claim structure to at least 12% protein will be essential to execute the majority of samples seen so far.

This week, the MV Arklow Accord began loading 6,000 tonnes of East Anglian feed barley in Ipswich bound for Portugal. Loading has commenced as an over-the-side operation, with the good summer weather helping the logistical flow. There have been similar flows from Southampton and Tilbury ports, and Frontier’s total feed barley exports for the week stand at approximately 30,000 tonnes. 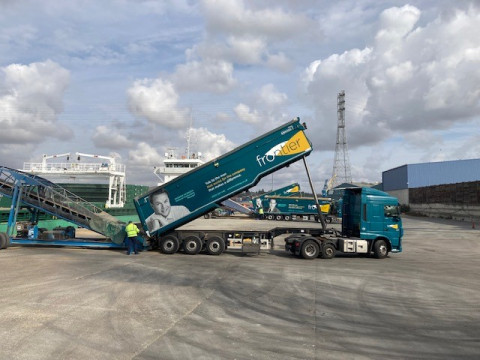 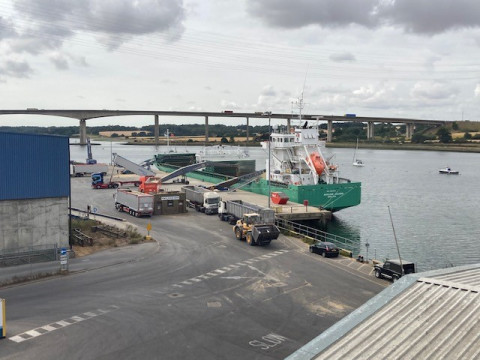 Values for feed barley, particularly in the forward months, have not moved much this week. Wheat prices remain stable and have moved in a range of £5-6/t with barley following suit. Barley’s discount to wheat remains around £20-25/t depending on location. Export sales remain limited due to a reasonably sized crop in the importing countries and current lack of demand. The UK will stop exports shortly as domestic prices will capture barley, even from the south and east regions if UK export merchants cannot get better export bids. Quality remains very dry and bushel weight very high at around 70 kg/hl. As of now, we are yet to see any demand filtering through from what could be a drought-affected EU maize crop. This may be due to thoughts that the old crop Ukrainian supply will start to arrive if the export corridor soon begins to function as negotiated.

Frontier has nearly completed sampling the winter malting barley and, with only a few exceptions, results are good, although we’re seeing lower than average nitrogen and screenings are limited. We are starting to see more spring sown spring malting barley and while there are some farmers with mixed results due to sowing date, soil type and rainfall, generally they have been following the same theme as the winter varieties. Generally nitrogen is in the mid- range, but those on pre-harvest contract farms are seeing perhaps lower nitrogen levels and lower screenings. French harvest has completed on spring types with very useable nitrogen levels and good screenings. The country’s winter sown springs have yielded particularly well, as has the UK’s winter sown spring barley.

Growers are advised to make provisions to cool and aerate barley going in store to maintain germination levels. Malting premiums are historically very high at £50-80/t, depending on month of movement and location. Grain with higher or lower moisture results will need significant aeration.

With current rapeseed prices back to levels last seen prior to the Russian invasion of Ukraine, it is perhaps not surprising that farmer selling is relatively light despite most parts of the UK seeing some harvest activity in recent days. There’s been a bull market dating back to the start of last year, which came to a dramatic end a couple of months ago. There have been a number of factors in play here, including recessionary pressures in many of the world’s economies, weak energy markets and a recent lack of Chinese buying in oilseeds markets. However, another factor that has influenced the market has been the realisation that global rapeseed production is likely to set a new record in 2022/23 – this has been the key drag on prices.

Soaring prices have ensured that farmers worldwide have planted an extra 300,000 hectares for harvesting in 2022/23 which sets a new record total at almost 37 million hectares. Swings in yield will clearly be a major factor but Canada, which typically produces 30% of global rapeseed, is expected to bounce back after its disastrous 40% drop in yields last year. Overall, rapeseed and canola production in 2022/23 is expected to be up by 7.3 million tonnes to a record total of 72.7 million tonnes that more than offsets the 1.3-million-tonne decline registered in 2021/22. Hot weather has certainly impacted the European crop in recent weeks, but it is still estimated that the EU crop will be up by over one million tonnes this year at a total of 18.5 million tonnes, which would represent a five-year high. Much of eastern Europe has been struggling but Germany is reporting exceptionally high yields and looks likely to have a crop 11% higher than in 2021.

There is still a long way to go for oilseeds markets, with many uncertainties ahead including the weather in North America and Australia as well as the political situation in the Black Sea region. Continued volatility in markets over the coming months looks likely but the current prospect of ample supplies in 2022/23 is making buyers cautious.

Granular urea had temporarily shown a stabilised price following the Indian urea tender. This stabilisation was due to significant increases in gas prices, which has caused some European manufacturers to stop supplying AN.

There has therefore been a renewed interest in urea across Europe, which has already started to impact on farm levels here in the UK. This renewed urea demand is likely to amplify some of the short-term availability concerns and cause urea price to climb.

UK AN offers still remain at a significant premium in value per kilogram of nitrogen in comparison to urea and protected urea sources, for those growers still looking to buy a nitrogen source.

Liquid UAN offers appear to be avoiding this volatility in market values at the moment and continue to remain excellent value, albeit volumes being offered are limited. All liquid users should ensure they have tanks filled and work out their spring requirements with their Frontier contact.

With harvest almost in full swing across the UK, the enquiries and demand on PKs has dropped off considerably. This low purchase interest is replicated elsewhere across the globe linked to the continued high cost of raw materials which has discouraged purchasing.